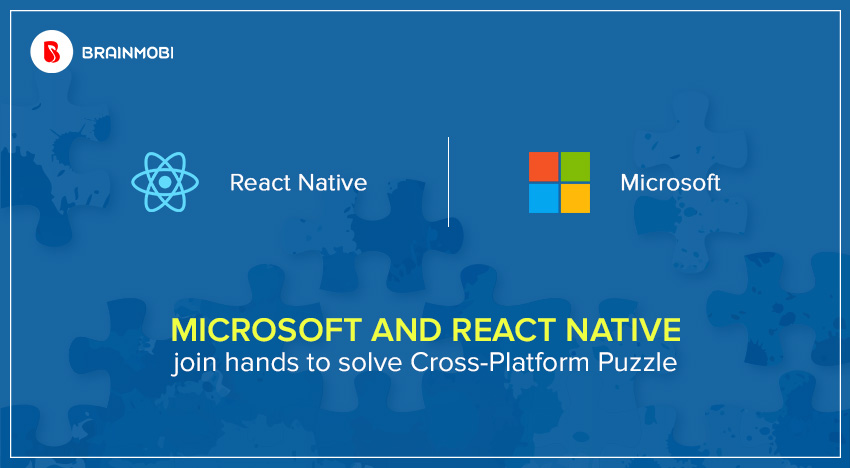 Microsoft is focusing a major portion of its interest and attention towards cross-platform development framework React Native which stands as a key solution to the problem of writing applications that could span for both mobile and Windows.

It is quite essential for Microsoft to offer cross-development to the top react native application developers because in order to consolidate the platform both first-part and third-part apps which access Office 365 or Azure services would need to run on iOS and Android and more importantly on Windows. This is to be kept in mind with the upcoming Surface Duo which is a dual-screen Android device expected to come by the end of the year.

Back in 2016, the company acquired Xamarin which enabled development for iOS, Android and macOS utilizing C# and .NET. Microsoft on the other hand invested in .NET Core which operates on Windows, macOS, and Linux.

Microsoft was initially aimed at server development and .NET Core is supposed to support desktop Windows applications. By 2020 there are speculations that .NET 5 will also be available and it shall be able to target Windows, Linux, macOS, iOS, Android, tvOS, watchOS, WebAssembly and plenty more.

Despite this activity, Microsoft doesn’t seem to be depending entirely on .NET for its cross-platform development endeavors. There could be plenty of reasons and most importantly it seems like the Windows Team has been accustomed to the problems that come with .NET and the overhead of the Common Language Runtime whenever it comes to developing C++ for performance reasons. WinUI is the next-generation API for Windows desktop applications and is built entirely in C++. Also, there happens to be a cluster of developers who are familiar with JavaScript and Web technology because of the exploits of React Native mobile app developers.

The best React Native mobile app development company fulfills all of these requirements. The React Web Framework was built by facebook with the intention of building a user interface in Javascript. 2015 was when Facebook released React native which propagated the user of React for mobile applications for iOS and Android. React Native for Windows was sponsored by Microsoft and gives the advantage of targeting Windows 10 UWP (Universal Windows Platform) which was sponsored by Microsoft and at the same time enables the framework Windows Presentation Foundation for WIndows 7 or higher. UWP utilizes native WinUI controls and developers can code in the native Javascript or TypeScript. Extended tooling is provided by the popular Visual Studio Code Editor.

The best React Native mobile app development company in India is capable of generating for windows generates .NET code and it appears that it might soon be replaced with C++ implementation in an upcoming release that goes by the name of vNext. Keeping in mind the presentation plans for Ignite, Microsoft managers Kalita Saintonge and Steven Moyes said that the vNext version shall be production-ready by the end of 2019 and shall help reduce plenty of memory requirements and performance improvement. React Native is reportedly a leaner platform than the Electron framework (another cross-platform development solutions) because it does not require much of an embedded browser engine.

There are other clues concerning the importance of how Microsoft attaches to React Native mobile app development to one of which is already being used by the Office team. The upcoming office calendar application is also one of those in preview and these applications make the heavy impact of the vNext implementation instead of .NET.

It is intriguing to figure out how companies using React Native shall target the new surface devices. React Native is building native applications and it totally stands to reason that react could be a great platform for targeting multiple platforms and target applications accordingly.

While Xamarin is the official platform that Microsoft should be promoting but it seems that React Native seems like an equally good choice to target Windows especially for those with existing C# code or skills. But considering the wider reach and talent of C++ coders, it seems like React Native shall be favored by windows and office teams for the best performances.

Besides which the react-native-windows project team is also keen on re-implementing React Native mobile app development for Windows within C++. The prime objectives are two-fold. The C++ implementation is poised to bring better performance, unlike the usual realized C# codebase. Secondly, the C++ codebase aligns better using the shared C++ react-native core as the platform evolves.

The latest Github repository extends a lot of support for Windows 10 SDK, which potentially allows React Native developers to target almost any Windows 10 devices. Following which the react-native windows team aims at maintaining a large degree of backward compatibility with any existing C# apps, manager views, and native modules while allowing any minimal breaking changes. The first project milestone listed which shall be made live by June 30, 2020, shall seek to ensure that developers are able to create full functional React Native apps for Windows 10 which meet the standard criteria for performance, accessibility and feature parity using React Native.

The new repository adds support for the Windows 10 SDK, which potentially allows React Native developers to target any Windows 10 devices. The React Native Windows team intends to maintain a large degree of backward compatibility with existing C# apps, view managers, and native modules, while allowing minimal breaking changes. The first project milestone, listed as due by June 30 of this year, will seek to ensure that developers can create meaningful React Native apps for Windows 10 with adequate performance, accessibility and feature parity with React Native.

This latest implementation of React Native mobile app for Windows occurs within the vNext branch of the Github repository and extends support to React Native 0.58. The corresponding vNext project documentation states that the vNext branch will tend to release in lock-step with the facebook/react-native matching version numbers.