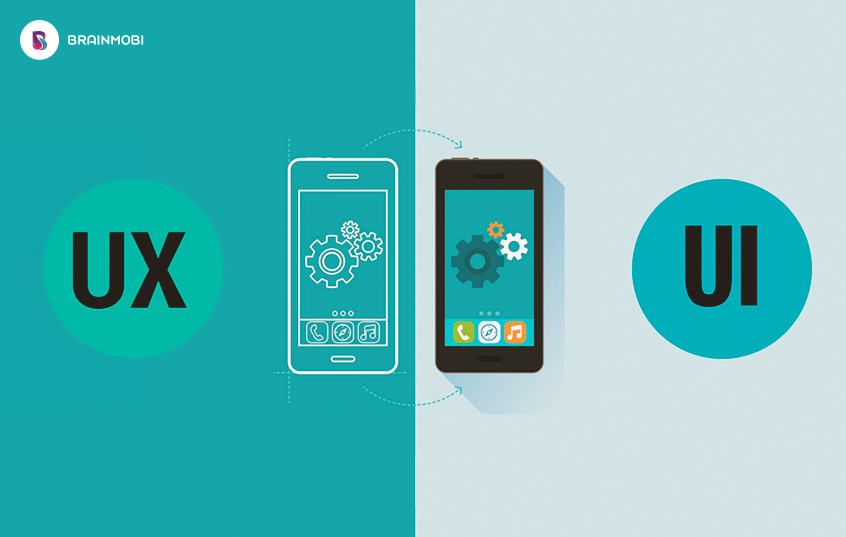 This is the second installment of the Mobile App Design Basics series, a series of blogs which would help you know more about the how the process of designing mobile apps works. If you haven’t watched the first post yet, check it out here. It gives you a brief idea of what not to do as a UI/UX designer.

While we have all heard the terms User Experience(UX) and User Interface(UI), we often see them written together like UI/UX. The two terms are most commonly used interchangeably. While it can be used interchangeably to a certain extent, they make up two different parts of the design. UX is a rather analytical and technical domain of the designing process, while UI is more about the graphic design and the overall look of the product. While on the surface, the definition just mentioned holds true, on a deeper inspection, you would see that it is a lot more complex than that. Let’s understand the difference between the two:

In technical terms:
UX enhances customer satisfaction and loyalty by enhancing usability and ease of use that the user would face while interacting with the product. UI, on the other hand, takes care of what the product looks and feels like. On a first glance, it is the UI that attracts users to the products. But it is the UX that decides how useful the UI would be. It is the role of the UX designers to design user flows and wireframes which are then prototyped and tested. Once the tests are passed, it is the role of the UI designers to make them appealing. While the UI focuses on connecting with the users on an emotional level, the UX focuses on helping the users to accomplish various tasks within the product.

While UI and UX are closely linked, as we have already seen, they both have major differences. Even with these differences, the roles are interchangeable since the ultimate goal is to retain the audience by giving them an experience that they would want to come back for. And that is difficult to do in isolation. Hence they are both really important.

BrainMobi has a team of expert UI/UX developers. We are a top mobile app development company and our team of UI/UX developers plays an important role in making us who we are. Connect with us at sales@brainmobi.com to know how our UI/UX developers can help make your product the best version of itself.

Is the difference clearer now? Let us know in the comments below!