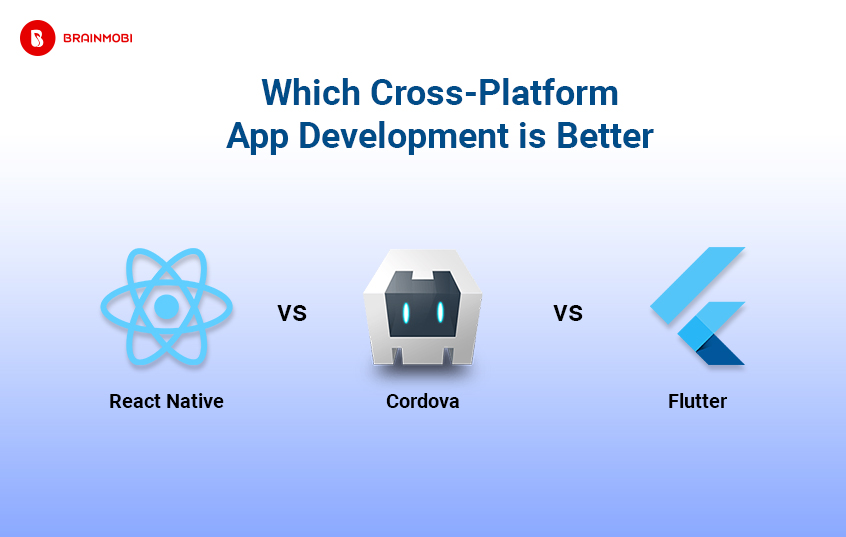 Cross development approach for your business requirement can be quite a tricky situation considering the vast amounts of facts and myths surrounding the areas of native and hybrid models of application development. While native development approach might surely be the pick for quality, application aspirants do fear lagging behind the consumer traffic when trying to approach one quality at a time. As one of the best cross platform application development company, we at BrainMobi aims to bring the best hybrid development solutions for your application projects. Considering the specific set of advantages every different cross platform exhibits, let us present to you a vivid comparison of the best three frameworks in practice which in turn shall give you a clear understanding when moving ahead with your decisions:

The preference of a cross development framework is reduce the development effort and making a choice between flutter, cordova and react native will rely heavily on which serves this particular task the best.

Cordova was built on the claim “write once, run anywhere” and is believed to be more authentic than any other frameworks that deliver the same. This can be attributed to the fact that Cordova makes good use of the HTML5, CSS3 and javascript for app development. Above that it is also possible for cordova to wrap an existing web application into a native android or iOS application. Such a amount of flexibility and simplicity can greatly minimize the effort of creating an applications for multiple platforms.

React Native mostly follows the philosophy of “learn once and write anywhere” which is not to be confused with the write once run anywhere feature. But despite of that, development practices has suggested that almost 85% of the javascript code across any mobile platform. Still when considering to implement it over a larger volume of many different projects, it might not be the apt choice but is preferred by developers when hitting a single huge sized project. However cases when same UI elements are are required in its native guise for a specific platform, it demands a native approach.

Flutter too is capable of developing some high-performance and high-fidelity applications for iOS and Android from a single code base. It although has a very different architecture and unlike javascript the choice of language is Dart and that also assists in reducing the volume of code written. Several examples can be found in flutters official github repository. The object oriented mode also contributes primarily to the single code base capabilities of flutter.

While Cordova might fare better in quick development, when compared to React Native, it does compromise in the applications performance. Unlike applications build with react native, those build using Cordova are web applications wrapped in web view.

Webs wrapped in a webview are puts a lot of constraints on the applications that can developed and the corresponding complexity. Javascript is essentially single threaded and that brings out issues of sluggish animations and poor responsiveness in the UI in comparison to the standards present.

React Natives brilliant architecture loads the same javascript code in a lesser performance load time. It does this by executing the code in its inherent thread which is separated from the main and layout threads. Not only this but linkage between react components and native views contributes to the applications performance. This also imposes far fewer limitations in comparison to the web view approach adopted by cordova.

Compared to the usual rates of 60 fps for react native and cordova, Flutter is capable of operating at better rate of 120 fps for devices capable of exhibiting 120Hz. And it isn’t simply the construction but by enabling the performance overlay you can diagnose performance problems better by monitoring the UI and GPU threads better.

Besides the advantage of building applications for several OS it is also important to consider the version support offered by the framework your are looking to choose. For example react native was incompatible for a large time for iOS 7 while it might have received its updates.

Cordova made its entry before react native and that brings with it a lot of advantages compared to react native which adds to its domination in the cross platform market. This gives rise to some maturity related advantages like:

React Native too is a very mature platform but not at the same level as cordova stands in. The platform does offer its documentation and receives a lot of community support but it isn’t as extensive as the one offered by Cordova. Above that react native relies heavily on component libraries and adds another brick to the maturity issue as many of the libraries are still underdeveloped. This also adds a lot of variables to the components which adds to the difficulty to the developers.

Flutter is best suited for applications that demand a brand-first design type project regardless of whether it is iOS or Android. But it is equally equipped for applications that require a stock platform approach as well. The flexible system that Flutter preaches enables the use of platform-specific APIs whether available in the form of Java/Kotlin Code for android or objectiveC/swift code in iOS. This is best suited to support maintenance costs and lower app development projects as it uses a single set of libraries for all your UI.

Cordova comes with a great documentation which guides you on the hows of creating a suitable environment for debugging. Although it is not inbuilt with any set of tools but it lets you configure and use any existing tools that might be implementable. Some of which are Safari’s Web Instructor with remote debugging for iOS and Chrome Dev Tools with remote debugging for android. These tools are enough to easily identify network, javascript without repeating the entire instance of rebuilding your app and conducting a trial and error.

Flutter framework provides the best debugging support for your application by making use of the flutter analyze function which will test your dart code in order to help you find the best possible mistakes. The Flutter enabled Ide/editor makes this process more automated. The Dart analyzer also makes use of type annotations that make it quicker and less painful compared to a react native or Cordova.

As one of the top flutter application development company, we at BrainMobi make a thorough research of all the platforms and the advantages they offer. Our experienced and efficient team of developers have the ability to make the best choice of framework as applicable from the demands of any application. If you have the requirement of mobile or web application, kindly write to us at sales@brainmobi.com .