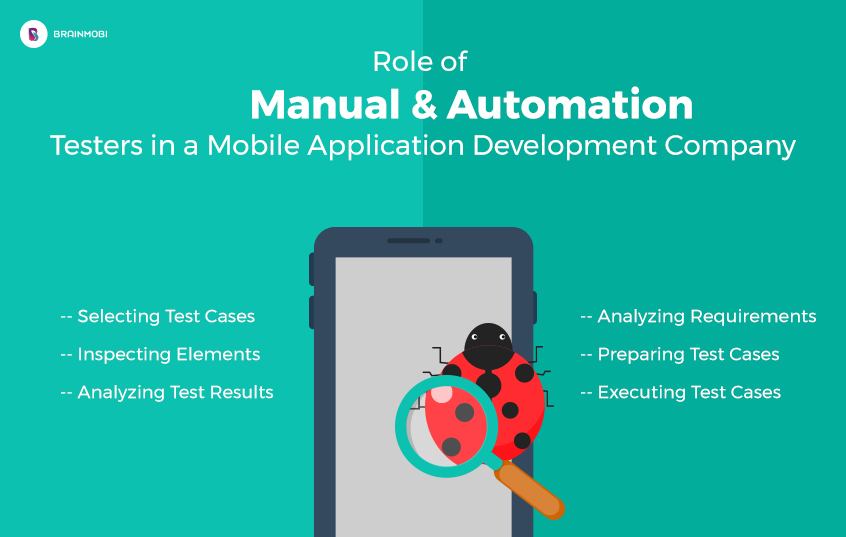 The role of testers is generally a topic with a lot of conflicting opinions. Their importance is highly debated as well. In one of our previous blogs, we had discussed about testing. This blog, however, would revolve around the role of manual and automation testers in a mobile application development company. We aren’t biased towards any specific type of testing since we recognize the importance of manual testing as well as automation testing. Both are vital to ensure that the apps we develop run smoothly without any bugs and errors, removing any errors that come up during development.

To start with, let’s dig into some of the basic roles of manual testers:

Most of the bugs that find their way into mobile apps are the result of inaccurate or incomplete functional requirements. No matter how well the code of the mobile app is written, if any ambiguities creep into the requirement, it would result in bugs. Hence one of the most critical tasks that a manual tester has to do is to analyze the requirements.

Preparing test cases is a major activity in mobile application development and is hence considered as a vital part of mobile app testing. It is important, not only for the testers, but also for the development team and the management. If the documentation for an application is missing, the test cases can be used as the basic document. Preparing test plans, scenarios, and test cases for module, integration and system testing improves the quality of the app.

This one is a no-brainer. Once the test cases are made, they need to be executed and the defects in the same have to be tracked. An app on papers is almost always different from the app that is developed. Hence, when the test cases are executed, they ensure that the app is running according to the requirements of the clients.

Next up, it’s time to take a look at the role of automation testers:

The current era of mobile app development is concentrated around automation so why should automation in testing be far behind? Most testing projects are now focused on translating manual test cases to automated ones which would help in improving productivity and coverage. Commencing automation testing without test cases is a shot in the dark, hence it is always best to select appropriate test cases in order to determine the Return on Investment(ROI).

Once the test cases for automation testing are defined, we go ahead and perform the tests. We inspect the elements(or objects, whichever term you prefer) and then prepare a separate set of test cases using Element locators and Selenium WebDriver methods.
Note: We are considering the case of performing automation testing using Selenium. This is because Selenium is one of the best and most popular tools used for testing.

Once the testing has been performed, it is time to group the test cases and generating detailed test reports using TestNG, an open source automated testing framework inspired by NUnit and JUnit.
After that, it is time to analyze the generated results, and to reporting defects(if any were found). In case the builds have been modified, they undergo regression testing to ensure that they are working in proper synchronization.

BrainMobi is one of the best mobile app development companies. Backed by a strong, knowledgeable team of top testing specialists, the apps that we build are totally bug-free and are highly efficient. Send us your requirements at sales@brainmobi.com for a free quote on your idea!