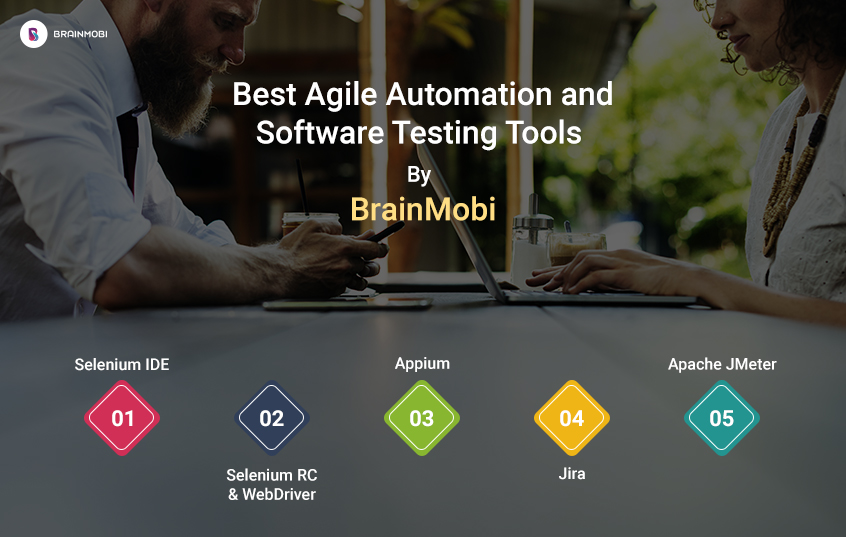 According to Statista, the total number of mobile app downloads around the world in 2017 was 197 billion.

That’s a scary number for those who have ideas they wish to implement as apps. The figure is even scarier for the indie developers who often don’t have a team and simply go solo. To make their app one of those 197 billion is quite a challenging task for every developer. Their apps have to compete with a huge number of apps to be downloaded.

One of the many factors which lead to the success of apps is how well it performs. To ensure that your app is performing well across all intended platforms, it is best to test it out. So here we present some of the best agile automation and software testing tools that we use ourselves:

You might have already heard about the popular software-testing framework, Selenium, which is used for testing web applications. Selenium IDE is the simplest tool in the Selenium Suite. It is basically a Firefox add-on which quickly creates tests through its popular record-and-playback functionality. The IDE is easy to learn and install.
It is easy to use, having the capability to convert tests to many programming languages including JAVA, HTML and the others. A key benefit of using Selenium IDE is that prior experience of programming languages is not required, due to its highly flexible nature. It has a login plugin which provides logging capabilities. As a user, you could easily debug and set breakpoints without learning much about it.

Selenium Remote Control(popularly known as Selenium RC) is a test tool allowing you to write automated tests for web application UI in all languages against HTTP websites using mainstream Javascript-enabled browsers.
Selenium WebDriver is a web automation framework which allows you to execute your tests on different web browsers.
Since both of the tools are web automation tools, you might wonder which tool to go for. To ease things for you, here’s a piece of information that might help: Selenium RC injects javascript functions into the browser when the web page loads, while Selenium WebDriver drives browsers using their built-in support. So choose wisely!

This issue tracking product from Atlassian is easily one of the most important tools mentioned in this list. Named after Gojira(the Japanese name for Godzilla), Jira is one of the most popular management tools in the industry. Its importance is not limited to testing but also spreads to other domains. It provides many functions such as issue tracking, bug tracking, and project management.
Developed in 2002, Jira is extremely customizable. It has certain defaults which can be changed as per the need of the team working on it. With the feature of sending notifications to relevant people, it helps you in getting your team actively engaged and in sync. It helps you make decisions a lot quicker and helps your team learn and improve with time.

For load testing functional behavior and measuring the performance of websites, Apache JMeter is one of the best tools in the market. It is an open source pure Java desktop application originally designed only for load testing but has now expanded to many other test functions. Testing through Jira is not limited to static resources and can be used on dynamic resources as well. It can be easily used to simulate a heavy load on a network, object, or server to test and analyze performance under different load types. While it looks like a browser, it isn’t, since it neither renders HTML pages like browsers do, nor does it execute Javascript found in HTML pages.

BrainMobi is one of the top mobile app development companies. Backed by a team of some of the best testers, we are known for the quality of the apps we build. Our apps are bug-free and perform well as per the requirements of our clients. Send us your requirements at sales@brainmobi.com for a free quote!