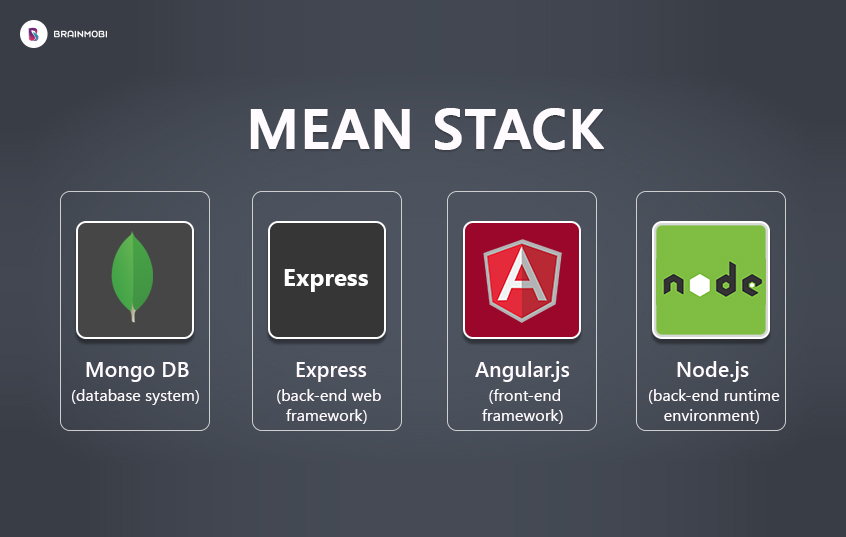 To successfully host maximum user engagement on your mobile app, choosing the most viable technologies and frameworks play a very crucial role. From a long list of the most popular technologies, MEAN stack holds a great prominence in building mobile apps and website. Launched in 2014, MEAN has gone a long way toward transforming the way the web and mobile app development practices are followed. The technology has been known to render a list of benefits while developing mobile apps and websites with ease and less time. Four components in MEAN Stack are recognised as “friendly and fun”  which includes:

All the four components when used together form a power house that helps in the rapid development of mobile apps. So, what are the advantages of developing mobile apps using MEAN Stack?

At BrainMobi, we consider a long list of advantages of using NodeJS with all the above four mentioned technologies together for well-rounded development practices. Included in the list at the top is flexibility that Node JS offers while switching between the client and the server. As JavaScript is the denominator of all above-mentioned technologies, it allows the switch between client and server very easy. Using MEAN Stack, it becomes easy to deploy apps directly on servers instead of first deploying it across stand- alone servers. It also proves to be a great sigh of relief for the Developers as MEAN Stack is based on one Universal Language instead of multiple itineraries of languages.

With MongoDB, it becomes quite easy to host apps on the cloud as MongoDB was developed for clouds. Once you are done with the development process upload your app on Cloud and make further changes without much hassle. Just imagine how convenient it becomes to test the app and make further modifications by just adding a new field to the form.

Are you familiar with Isomorphic Coding?

Isomorphic coding allows running a code written within one framework on other frameworks without much changes to the original code. Using MEAN Stack you can use this functionality in and out across whole source code without any changes in the original code which make MEAN a reliable and cutting edge technology.

Along with above features, MEAN Stack is well proven and had already been used across a long list of applications. It’s for sure that you would not have to face any challenges as far as any problem which may pop up down the road. Still unsure? Just try and conduct a Google search to find a solution for your problem and we bet you will receive a long list of solutions. Just to bring the attention, giants like eBay and PayPal have already been using the technology to garner benefits offered by the technology.

We can add so much to this list including if we go over how cost-effective hosting can be with Node.JS or the fact that JSON is everywhere. But what else would you add to this list?