5 Reasons Why Developers Are Migrating From Java to Kotlin 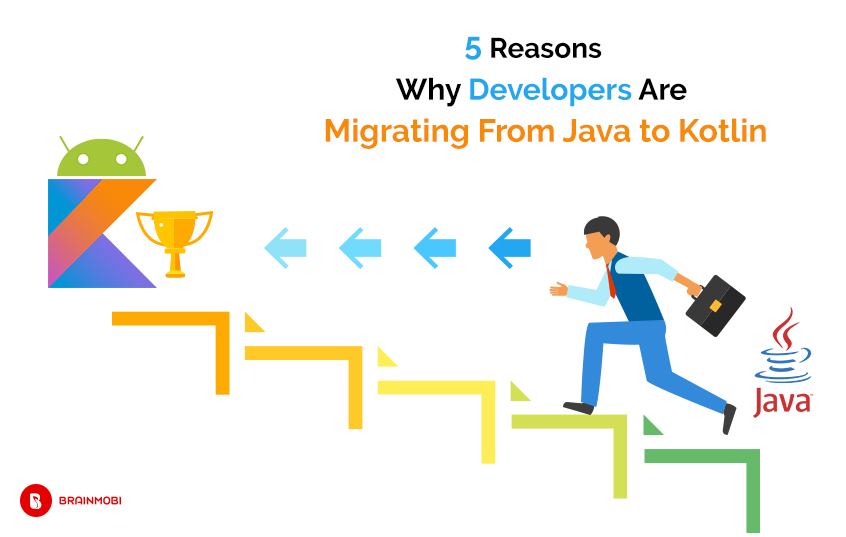 When android application development is the mission, the immediate go to language that springs out for any developer is Java. Why Android went forward to pick Java is a purely a matter of development concern and note should be taken of the fact python, Lua and Javascript and all of them had their own advantages of execution and were potential choices besides java.

One potential factor that helped android bring the best out of Java was the Dalvik Virtual Machine (DVM) which is responsible for running the applications just like the Java Virtual Machine. Its expectations to run on different mobile architectures and requirement of a different source code portability could be met best using JAVA. The runtime achieved was the closest thing that could simulate the JVM environment and in our perspective that’s one potential reason for the adoption of Java.

So while Android made all its successful progress using JAVA, a twist in the story popped up when Oracle (the creators and owners of Java) hit a staggering $9 Billion lawsuit on Google for violating a few of its terms and guidelines. Causes for conflict are fairly subjective and technical on legal grounds and above all they dont matter now. Because not only did Google win the lawsuit but went forward to create its own independent programming language thereby eliminating any sort of dependency on third party, in this case Oracle.

This is where Kotlin was born. This was around 2011 and in 2017, on the occasion of Google I/O 2017, Google announced Kotlin as the official programming language for Android. Considering how ambitious Google is with its android projects, it is evident that their in house production (meaning Kotlin) would be equipped with the best features and methods in concern to their needs.  As one of the top android application development company, we can easily lend the advice that Kotlin will be the goto language for any android developer and let us give you 5 compelling reasons why kotlin could be the perfect switch from java in the current time.

As a potential alternative to java, one of its key strength is the level of interoperability with Kotlin. This is a great boon for pre-existing java developers has their doubts of switching are resolved with advantages of easy switches. Java and Kotlin codes can exist side by side in the same or different project and everything will still compile perfectly. On top of that being a java developer and an aspirant Kotlin developer you can make the practice of making small trails with Kotlin coding for specific parts of your project written entirely in Java and vice versa. And this also lets you import certain java libraries as well.

Bottom Line: Switching is not that difficult

Being a newer language Kotlin has a comparatively more succinct, compact and precise code compared to the same written in Java. And this eventually leads to lesser bugs and hence easy testing. It is also a developers favourite as it is known to reduce a lot of boilerplate code which gives the developer a room to give more focus to other parts within the code. Kotlin android extensions also let you import the reference to a View into an activity file, which lets you work with the view in a manner that it was the part of the activity itself.

The Android Studio is based on an IDE that goes by the name of IntelliJ created by a company called JetBrains. JetBrains is also the creator of Kotlin. So obviously they had intentions of creating something new in a way that pre existing methods could easily adopt to it. As a result Android Studio has some excellent support for Kotlin. Now configuring Kotlin is a matter of a few menus. The Kotlin plugin for android studio makes it very easy for your IDE to understand, compile and run the code.

There are already many well known companies that have started using Kotlin for their core deployments. Renowned art and photography hosting site pinterest has all its latest android features and upgrades written down in Kotlin. Basecamp went on to shift the entire 100% of its code to Kotlin. Trello, Amazon, Netflix and Uber are some other renowned examples that have adapted to its technique.

As one of the best mobile application development company, BrainMobi has a great deal for experience of working with conventional practices and hence it knows which emerging practices are the fruitful switch. Our efficient team of developers can deliver the best solutions for android thanks to its rich expertise in java as well as Kotlin. If you have the idea for a mobile application kindly write to us at sales@brainmobi.com .